4/21 Update: The temporary strengthening work on the north side of Bimini Drive Bridge is complete, and traffic was shifted over to the north side earlier today. The reduced weight limit restriction on the Bimini Drive Bridge is lifted, and the north side of the bridge can now support loads up to the Florida Legal Limits. The contractor has mobilized to the Harbor and Seaview Drive bridges to begin the interim strengthening projects on those two bridges; weight limits on those two bridges remain at 4 tons.

4/9 Update: American Empire Builders completed the concrete pour to strengthen the Bimini Drive bridge on April 8. The concrete will need to cure and strengthen before traffic can drive on it. The target date to open the north side of the bridge to traffic is Monday, April 19. When it opens, the vehicle weight limit on the Bimini Bridge will be returned to the Florida Legal loads.

Florida Keys Electric Cooperative (FKEC) has been onsite at the Bimini Bridge performing directional drilling operations to install underwater electric lines. They anticipate completing the work by April 16, at which time Florida Keys Aqueduct Authority (FKAA) is planning to mobilize to begin the underwater installation of its utility lines.

Coordination and planning for the temporary work at the Harbor and Seaview bridges is ongoing. Once Bimini Drive Bridge is open to heavier traffic, the contractor and the utility companies will begin work at the two bridges. The initial work will temporarily relocate the utilities off of the existing structures so that the interim strengthening work can be performed.

3/24 Update: The temporary traffic signal at Schooner Drive is being removed. All remaining traffic signals are being reprogrammed to accommodate the removal of this signal and allow for quicker access across the Bimini Bridge. The roadway has been temporarily closed in this area as a result of safety concerns.  All traffic is to follow the detours onto Corsair Drive and use the traffic signal there to cross the bridge.

3/8 Update: At this week’s construction progress meeting, the contractor reported that the concrete pour last week completed the strengthening work on the Bimini Bridge abutments. He is currently installing brackets, hangers, reinforcing steel and temporary supports under the bridge to begin the beam strengthening work. The contractor anticipates pouring concrete to strengthen the beams in approximately two weeks.

In addition, the preliminary engineering plans and calculations for the interim projects on the Harbor and Seaview bridges were approved by the County’s engineer and are being finalized.  The contractor is working with utilities to begin temporary relocations for the interim work and the County’s engineering consultant is coordinating with permitting agencies as needed. The work on these two bridges will be performed simultaneously and it will begin as soon as the temporary strengthening work on the Bimini Bridge is completed in early to mid-April.

Due to challenges presented by the greater span length of both bridges the interim work on the Harbor and Seaview bridges will consist of replacing the existing concrete beams and deck with steel beams and a heavy timber deck rather than strengthen the existing concrete. When the work is complete, the allowable weight limit will be increased to the Florida Legal Load limit instead of a 30-ton limit as initially anticipated.

At the same meeting, the Florida Keys Aqueduct Authority indicated that their contractor planned to mobilize at the Bimini Bridge the first week in April to begin the directional drilling work to install subaqueous water and sewer lines.

2/25 Update: The interim strengthening work on the Bimini Drive Bridge is progressing. The contractor has completed the demolition of a portion of the east bridge abutment and has installed rebar and forms in preparation for concrete pouring.   Demolition of part of the west abutment and rebar installation is in progress and the contractor expects to complete concrete installation next week.  Upon completion of the temporary strengthening work on the abutments, the contractor will fabricate and install the temporary supports for the bridge beams and deck.

AEB has submitted preliminary engineering plans and calculations for the interim projects on Harbor and Seaview bridges to the county’s engineer for review and approval. Due to challenges presented by the greater span length of both bridges the contractor is proposing to replace the existing concrete beams and deck with steel beams and a heavy timber deck rather than strengthen the existing concrete. The benefit of this approach will be the elimination of the weight restriction instead of keeping a 30-ton limit as was initially anticipated, as well as a reduction of future demolition costs when the full replacement of Harbor and Seaview bridges is undertaken. Coordination with utilities for relocations that will be needed has begun and communication with permitting agencies for the work at Harbor and Seaview is ongoing.

Project staff is evaluating alternatives for placing warning signs near the Seaview Bridge to alert boaters of the closure at Bimini Bridge before they travel down the canal.

Several new poles have been installed near the project area as well as underground contractor tasks are being completed that are required to be done prior to the new Bimini Drive Bridge. 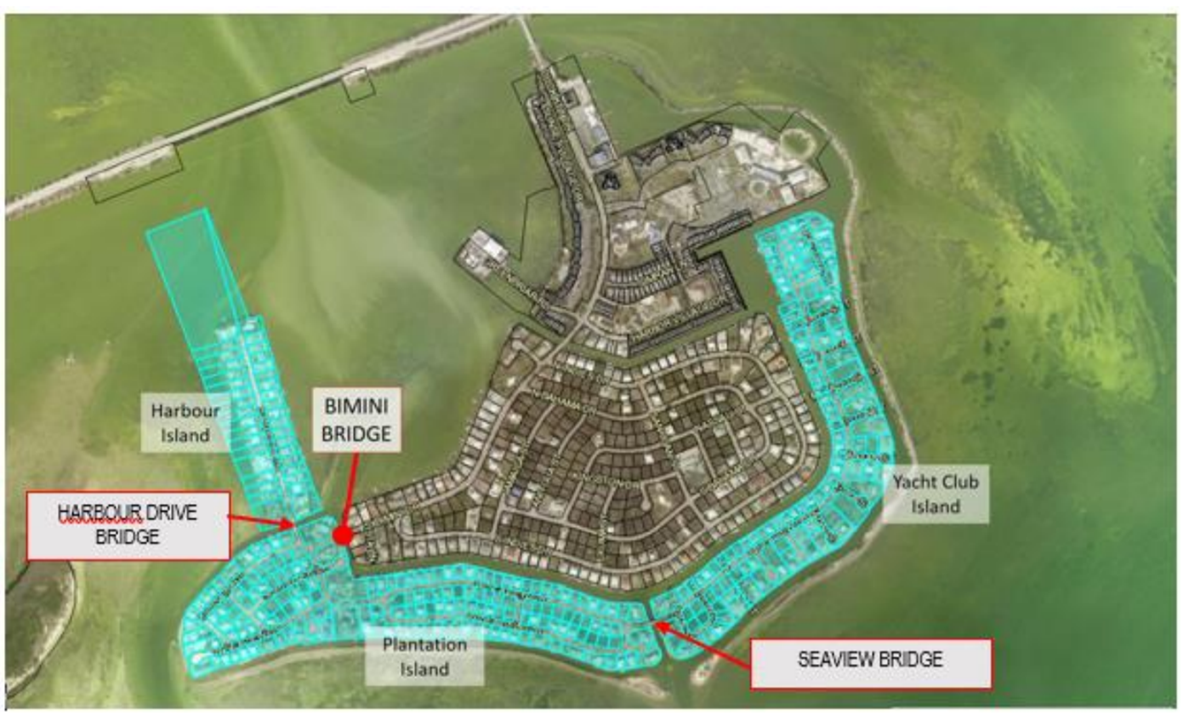 The ratings for Harbour Drive and Seaview bridges are lower than the initial rapid analysis suggested. Signage has been replaced to notify residents and visitors of the change. County staff and design consultants are evaluating options to strengthen the two bridges for the interim period until the replacement of the bridges can take place. The County is providing weight certifications for Duck Key vehicles at the Long Key transfer station at no cost.

The contractor has secured construction barges underneath the Bimini Drive bridge as of Jan. 21, 2021.  The barges will remain in place for the duration of the project and will block all marine traffic underneath the bridge until the anticipated project completion date of June 30, 2022. The contact person for the Construction Engineering and Inspection (CEI) consultant for this project can be submitted to keith.duke@wsp.com.

The contractor is currently on-site working on the bridge strengthening phase of the Bimini Bridge with a tentative completion date of April 19, 2021. The date is subject to change and will be updated accordingly.

Active unexpired building permits affected by the weight limits on Bimini, Seaview, and Harbour Drive bridges will not be required to get inspections until 180 days after a solution for delivery of materials is available. If someone with an open permit is able to proceed by other means before that time, they may do so.

Emergency services are not affected by the bridge weight limits.

Residential gas/propane, electric, water, and sewer services are not affected by the bridge weight limits.

Monroe County is working with Marathon Garbage Service to provide additional options and revised services since garbage trucks cannot cross the three affected bridges. A modified smaller garbage truck will continue to service the areas over the Bimini Bridge, but those on the other side of Harbour Drive and Seaview bridges will need to continue to use the temporary collection site located on Kingston Drive between Exuma Street and Nassau Street. The temporary collection site has dumpsters for household garbage, yard waste, and recycling. Dumpsters at the temporary site are appropriately marked. Bring all household garbage in garbage bags for disposal. (Please, no open container dumping). The site is monitored.

If you have an extenuating circumstance regarding the ability to use the collection site or concerns, contact Monroe County Solid Waste Management at 305-292-4432 or Marathon Garbage Service at 305-743-5165 to discuss.

The Bimini Bridge, constructed in 1955, was already scheduled for replacement. County staff accelerated the bidding process for the Bimini Bridge with an estimated contract period to complete the replacement is 18 months. The County approved a strengthening plan for the existing north lane of the Bimini Bridge. This will allow one lane of traffic to cross while the south side of the permanent bridge is being constructed. The strengthened section will allow Florida legal weight limits to cross without a reduced weight load. Bimini Bridge affects Harbour, Plantation, and Yacht Club islands and also connects to the Harbour Drive and Seaview bridges.